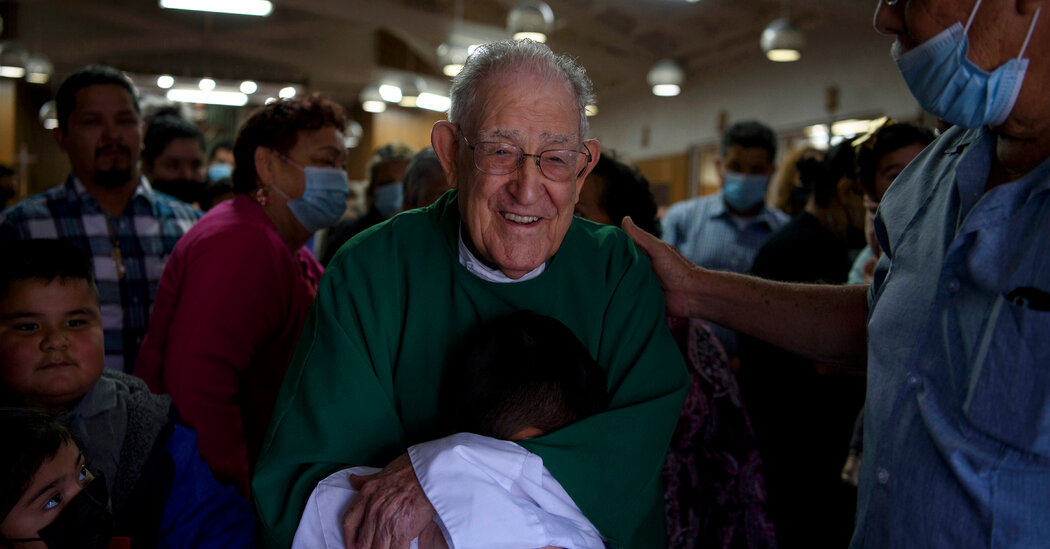 A hundred-year-old priest was expelled from his parish. He does not intend to retire.

BEAUMONT, Texas – The priest needed a helping hand putting on layer after layer of clothing. He carried a magnifying glass to help him read a handwritten list of prayer intentions. But as he rang a bell to let the congregation know that Mass was beginning, he let go of his walker and cane, singing with the choir as he walked up the central aisle to the altar.

â€œHe knows the difficulty of our life – it is not easy,â€ Reverend Luis Urriza said in Spanish, describing Jesus’ familiarity with the struggles of his disciples.

â€œHe’s been tested in every way,â€ said Father Luis. “Just like us.”

In fact, Father Luis faced his own test, perhaps the most intimidating one. At the age of 100, almost 70 years after creating the humble parish of Cristo Rey to feed a small but thriving Latino community in Southeast Texas, he was now forced to leave it behind.

Shortly after her birthday in August, the Catholic Bishop of Beaumont told her the time had come. Another younger pastor took over from Cristo Rey. His order sent Father Luis on a new assignment in Spain, his home country, to join other priests serving in a church near Madrid.

He didn’t want to leave. His parishioners organized a march in the hope of convincing the bishop to change his mind. â€œViva Cristo Rey!â€ they chanted. â€œViva Padre Luis! But the decision stood.

It was the test – of the vows of obedience he took eight decades ago, and of the trust he placed in the will of God.

He believed it was a divinely drawn trajectory that led his mother to take him to a monastery in Spain when he was 12 and eventually brought him to Texas. Now he was uprooted again. He hoped he would be pointed in a direction where he could continue to work and be of service, even though others expected him to rest.

â€œGod does things that you don’t understand,â€ he said. “Maybe they need me there.”

At 75, Father Luis tendered his resignation, as any Catholic priest was required to do. That was in 1996. From then on, it was up to his superiors to decide each year whether he would continue as parish priest of Cristo Rey.

Twenty-five years later, he has undeniably slowed down, but he moves steadily without a walker or cane. The first steps are the most difficult, but then he goes for it. He sometimes grasps the words in English, but he attributes this to decades of speaking primarily Spanish. He always makes his own dinner at the rectory, tossing a drizzle of Spanish oil into his canned chicken noodle soup before microwaving it. Barely three years ago, he stopped traveling to shop and visit the sick in the hospital.

Father Luis bristles at the idea that his advanced age makes him unfit to lead his parish.

Still, the work can be demanding. Even more when the parish is as lively as Cristo Rey.

â€œThere is a reason why we still do not run businesses or businesses or parishes with 100,â€ said Bishop David L. Toups of the Diocese of Beaumont. He described Father Luis with his congregation as a “grandfather with his children, with his family, weaker and weaker”.

â€œIt’s harder to do the things he would have done years ago,â€ Bishop Toups said, â€œbut his love for his people remains.

The Catholic Church of Beaumont is experiencing a generational change. Bishop Toups, who arrived last year, is 50 years old. The pastor of the diocese’s cathedral retired this year after 41 years of priesthood, and the longtime pastor of another parish died in August at the age of 87.

Yet even though many Cristo Rey admitted that a future without Father Luis was inevitable, the decision to take him out shook them and angered them. There was even more confusion when the Order of Saint Augustine insisted that he return to Spain.

Here are some more compelling stories that you can’t help but read until the end.

“It’s unfair, it’s an injustice to him,” said Angelica Perez, who joined the church after arriving from Mexico more than two decades ago.

â€œWe love you, Father Luis,â€ she told him during her visit to the church last week. “Know that.”

On the Friday before her last Mass this month, church women were in her presbytery room, rummaging through her dressers and closet, throwing away worn undershirts, browsing through old photographs, and carefully folding clothes sewn by her. his sister in a suitcase. â€œThis suitcase is 70 years old! laughs Silvia Rodriguez.

The walls of his office were bare. The photographs and memorabilia that had covered the panels had been wrapped. But he was behind his desk, working. He crawled to the front door every time someone rang the bell and asked him to hear their confession. He answered the phone – “Cristo Rey!” – and gave the callers directions to the church.

“Yes, mum mia!” he huffed at every interruption.

Cristo Rey is a simple church, located on a busy street behind a Family Dollar store, next to train tracks carrying trains that honk during mass.

Inside, the parish is emblematic of the vitality that young immigrant communities from Latin America and elsewhere have brought to the Catholic Church, even as it has been rocked by scandal and many have moved away. of institutional religion. This energy was reflected in the handwritten records in Father Luis’ office: 920 babies have been baptized since October 10, 2015, according to the most recent volume; over 120 children received First Communion this year.

The church looks after more than the spiritual needs of its parishioners, many of whom are trying to find a foothold in a new land. It organizes health fairs, mental health programs, bilingual forums with political candidates, clinics for undocumented migrants, and workshops on applying for college or getting help recovering from your career. ‘a hurricane.

â€œThere is so much that we do here,â€ said Jacqueline Hernandez, 30, who has been coming to Cristo Rey since the age of 5. “It’s a resource center.”

When Father Luis arrived in Texas, he quickly discovered that there were dozens of Mexican-American families in need of a church of their own.

Necessity was then rooted in more than language. (At that time, Mass was still said in Latin.) Some churches were separate, with Hispanic and black worshipers crammed into pews at the back.

At first, a family let Father Luis celebrate Mass inside their house. The pastor of another parish in the neighborhood with a congregation of mainly Italian-American families offered to let them assemble in a small room. â€œNever at church! Father Luis said, an affront he saw as an indication of the disdain other priests had for his parishioners.

He concocted the money to build Cristo Rey in the early 1950s. Proceeds from bingo paid for supplies to add a church hall. â€œWe built the hall ourselves, the people,â€ said Father Luis. â€œI was a younger man back then. At first, without the help of a choir, he played the organ and sang hymns.

Today, around 35% of the inhabitants of the diocese of Beaumont are native Spanish speakers, said Bishop Toups. Despite being spread across nine counties, Cristo Rey has been the heart of this community, even for those who no longer worship there regularly, a point that did not escape the bishop’s notice.

â€œWe will send priests to continue to graze, to walk with and to accompany the people of Cristo Rey for future generations,â€ said Bishop Toups. “The reality in church life is that ministers come and go, bishops come and go, priests come and go, but the church remains.”

Even though he did not continue as parish priest, many in the parish wanted Father Luis to stay close. They could take care of him. “He survived Covid, he survived wars,” Ms Hernandez said. “We really want him to receive the treatment and respect he deserves.”

Still, he doesn’t want to be the one we’re taking care of. The appeal of the mission to Spain, he said, is that it has been assured that there will be work, especially with a growing immigrant community.

“It is something beautiful,” he said. â€œGod calls you to do this work.

On October 17, Father Luis led the congregation for the last time through the prayers of the Sunday morning mass.

After Communion, the parishioners requisitioned the microphone.

â€œI know your heart is racing,â€ said one man. “We have Father Luis in our hearts and he will always be here with us.”

“Even though I won’t be there,” replied Father Luis, “I will never forget you.”

After mass, Father Luis stood by the door as hundreds of people walked through, each person hugging him, patting their elbows and snuggling up for photos. The teenagers entered the church to ask for his blessing. They cried when he raised his hand and mumbled a prayer.

A group of parishioners followed him as he went to the sacristy: no more photos, no more hugs. He finally took off his clothes and sank into a chair. “I am tired!” he said with a big sigh.

But then a woman approached and asked Father Luis to hear her confession. He kicked everyone out of the room except her.

Community calendar from October 24 to 30

“Blessing box” dedicated to the Church of St. Therese in Hellertown