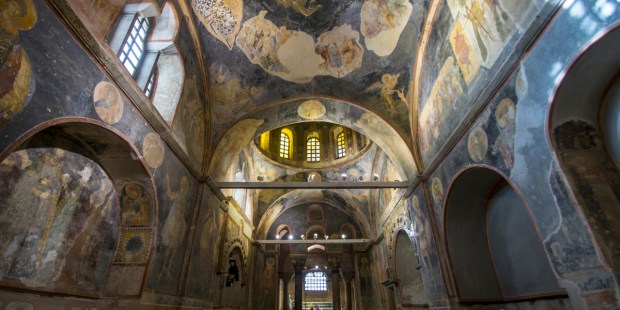 From cheesy blessings to fragrances created by accident in isolated monasteries in the Tyrrhenian Sea, the Catholic tradition has been the birthplace of far more inventions than you might think.

The word “Catholic” literally means universal in the Greek original – katholikos. It was first used in a letter sent by Saint Ignatius of Antioch to the Smyrna around the year 110, then included on several occasions by other early fathers in several different texts, letters, sermons and catechetical conferences such as those of Saint Cyril of Jerusalem. It was eventually used formally and with authority to designate Christianity as the official religion of the Roman Empire, both eastern and western, with the edict of Theodosius By Fide Catholica, issued in the year 380.

In short, Catholicism is far from being a homogeneous tradition. It is rather multifaceted, rich, often dissimilar. The 24 churches that make it up (Eritrean, Maronite, Syriac, Greek Byzantine, Ethiopian, Coptic) have distinct liturgical, spiritual, theological and canonical traditions that have been preserved and passed down from generation to generation. It is a fairly complex heritage which, despite (or perhaps because) of its diversity, is considered universal – literally, Catholic – by those who participate. So it’s no wonder that there are things we might not know about it. Here we wanted to share five curious things you might not know about the Catholic Church.

1. Universities are a Catholic invention.

To think of the Middle Ages as a dark era is a worn-out clichÃ©. The charge was originally made by Renaissance humanists who wanted to understand themselves as the direct heirs of classical antiquity.

The university system as we know it developed in Europe around what were then called “cathedral schools”: academies, generally attached to a monastery or a cathedral, for clerics studying canon law, theology and philosophy. Soon these schools opened their doors to the laity, thus becoming centers of literacy, issuing the same degrees that we are still looking for today: bachelor’s, master’s and doctorate.

2. The monks helped create the perfume industry. But it was an accident.

A few years after the completion of the Charterhouse of Saint Giacomo (in the 14th century), the prior was surprised to learn that the queen who had donated the land for the building, Giovanna de AngiÃ², was due to pay an official visit. He rushed to make a flower arrangement, with the most beautiful flowers on the island, to receive her.

When the queen was gone, when the flowers were to be thrown away, the prior noticed that the water (which had not been changed for three days) had acquired a scent which was unknown to him. He brought the water to a botanist monk, who traced the origin of the smell toâ€œGarofilum Silvestre Caprese.â€ This water, according to history, became the first perfume of Capri.

3. There is an official and proper way to bless cheese.

Chapter VIII of the Roman ritual, a liturgical manual dated 1614, includes special blessings for almost anything you might use daily. The chapter is titled â€œBlessings of Things Intended for Ordinary Useâ€. There you will find blessings for cheese or butter, for seeds, for salt or oats for animals, fishing boats, tools used by climbers and even beer.

The Greeks and Romans, in Christ’s time, were shaving. In some very old images of the baptism of Christ, Jesus is depicted beardless, unlike most Byzantine representations. As early as the 6th century, English canon law ordered clerics to “let neither hair nor beards grow freely” (Clericus nec comam nutriat nec barbam).

This ban was strictly enforced throughout the Middle Ages. The Council of Toulouse (1119) threatened with excommunication all those clerics who would let their hair and beards grow “like laymen”. But there was a loophole in this law, which was interpreted to allow the use of short, well-groomed beards. The phrase barbam nutrire (“Growing a beard”) used in this law did not appear to strictly prohibit the wearing of a short beard.

However, some saw facial hair as representing a multitude of sins. Shaving would symbolically imply the “removal” of sins and vices considered not only harmful but also superfluous, because facial hair is perfectly consumable and unnecessary. But there are practical reasons related to the liturgy itself: clerics should not let their upper lip hair prevent them from drinking from the chalice..

5. â€œGuadalupeâ€ is not a Mexican name.

Guadalupe, strange as it may sound to some, is probably not a Mexican name. In fact, it’s not even Spanish, although it was originally the name of a river in the Spanish province of Extremadura.

According to some, Guadalupe is a Castilian, or standard Spanish, version of the Arabic Wadi-al-lubben, which means â€œthe hidden riverâ€. Arabic is no surprise: it should be borne in mind that the Iberian Peninsula was occupied for about eight centuries by the Moors, Arabic-speaking Muslims from North Africa. According to others, the name is an Andalusian mixture of Latin and Arabic (known precisely as “Latin Arabic”), from Wadi-lupe, “the river of wolves”.